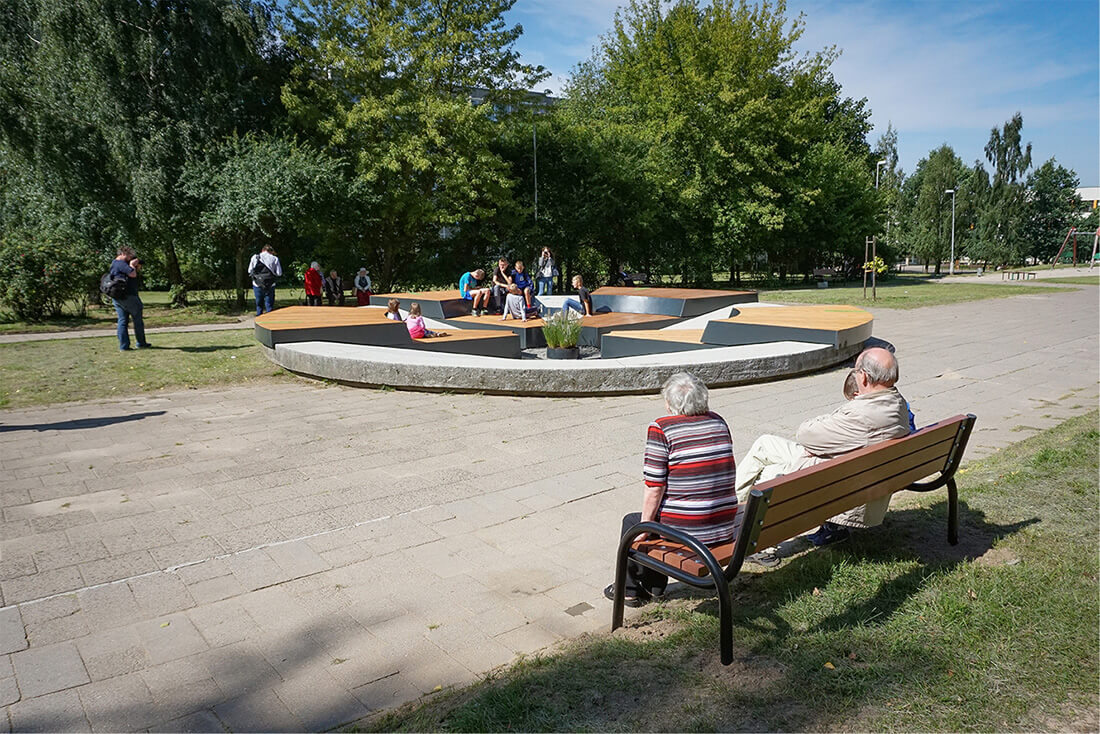 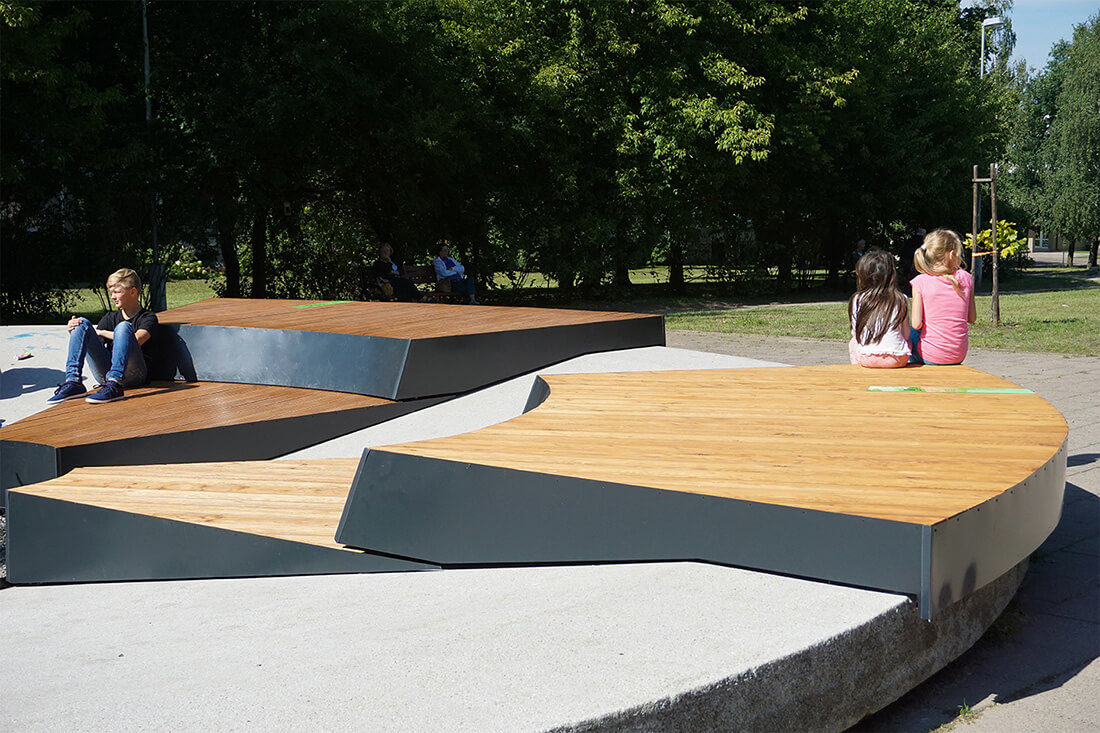 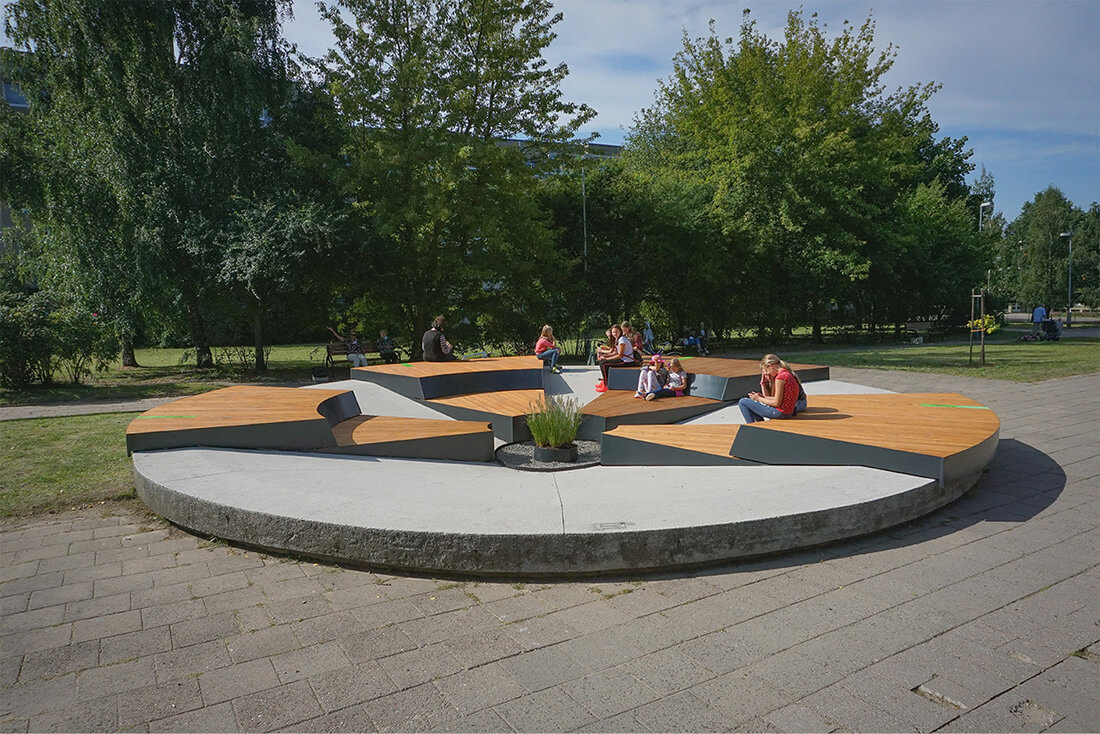 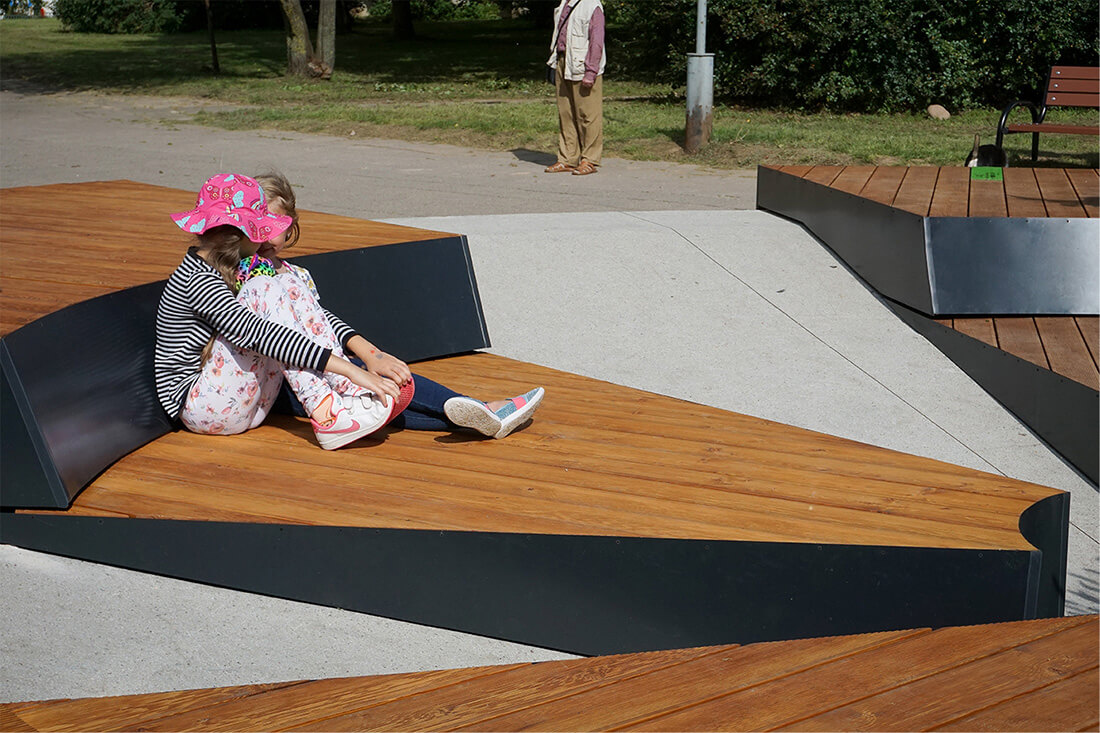 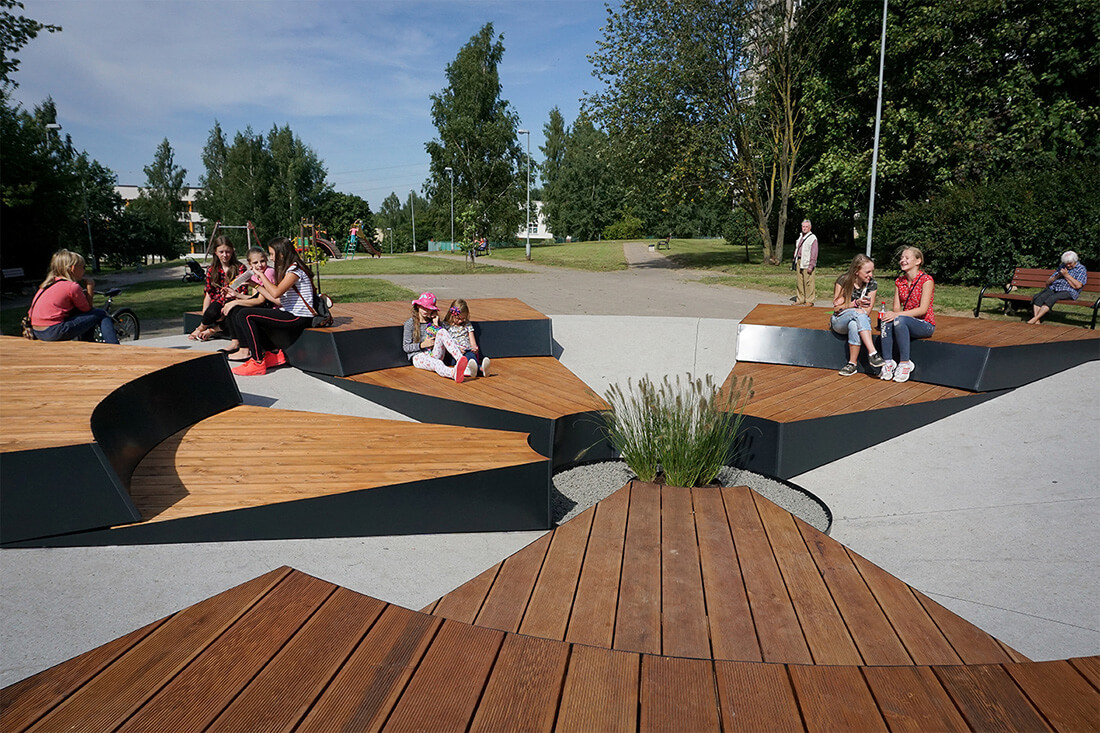 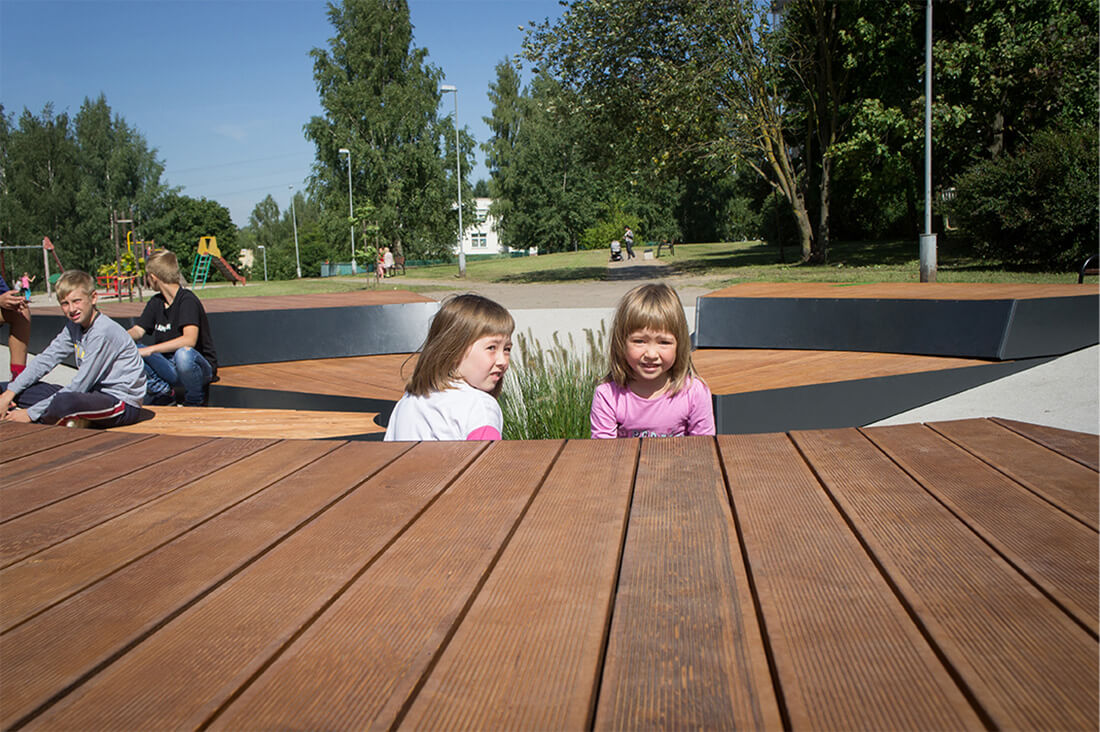 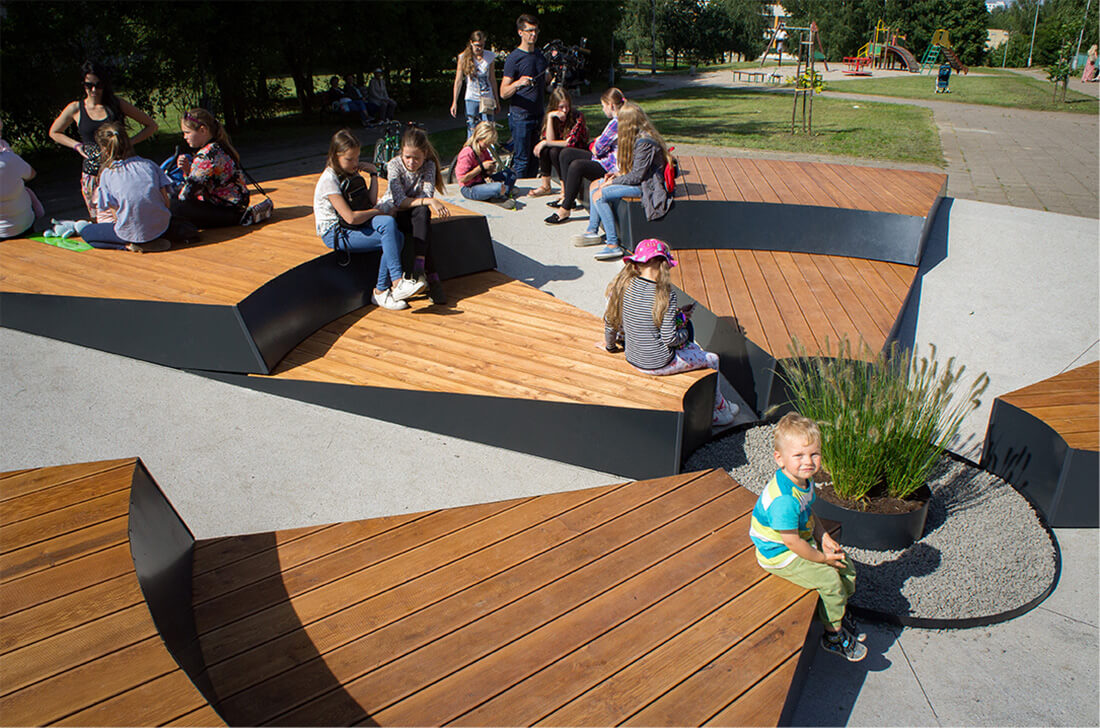 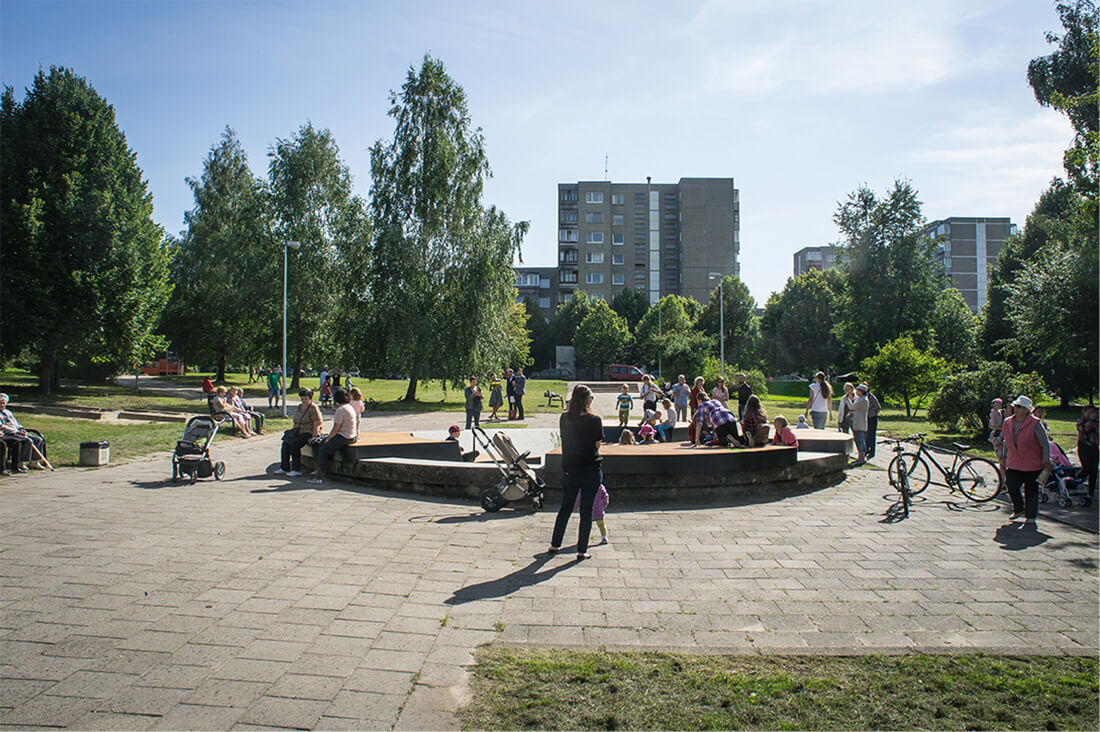 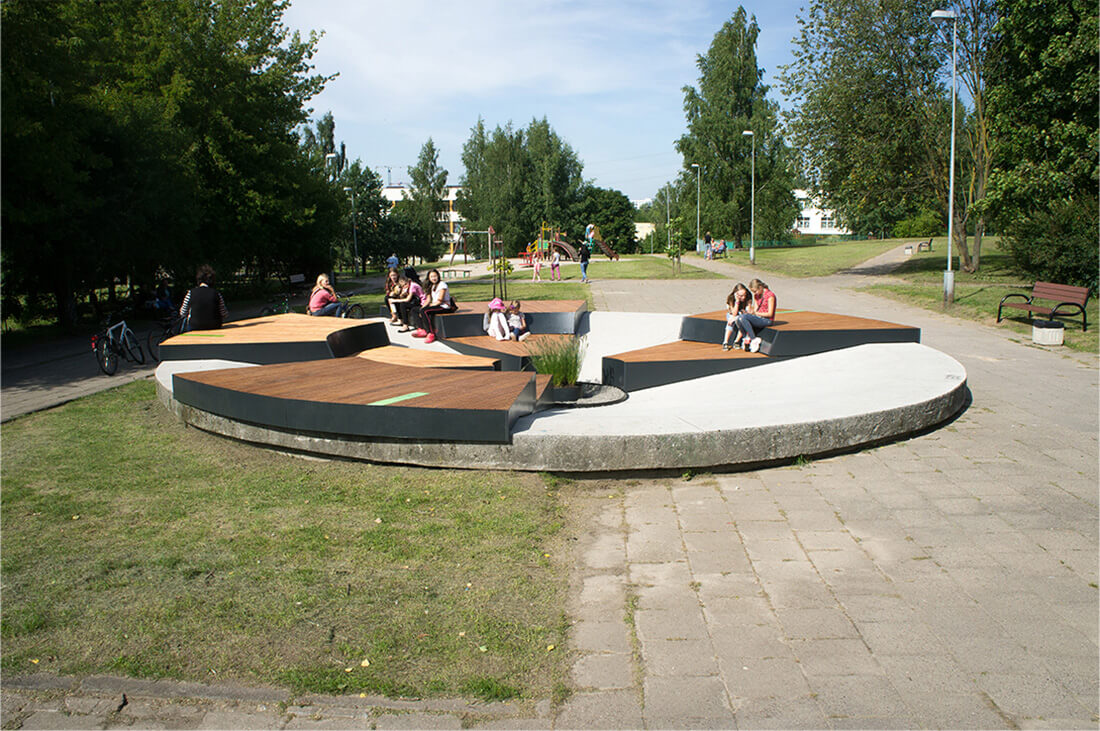 REVITALIZATION OF THE DISTRICT JUSTINISKES IN VILNIUS

Pizza Project is a continuation of City Patch concept.
In the district of Justiniškės built in the 1980s, we noticed many objects that do not fulfill their original role anymore. They are rarely used and there is no idea what to do with them. Radical changes, which require a great deal of time and money, are happening, but obviously very slowly.

We chose to work with two places frequently mentioned by residents of the district as underrated/forgotten, located along the main pedestrian path. This are: an amphitheater (concrete neglected object, sometimes used for mass events like concerts etc) and a broken fountain in the shape of a concrete circle, which is currently completely unused.

During the meeting with residents, they were pointing out the lack of place for a common meetings (there are many benches in the neighborhood, but they do not allow to spend time in the group), as well as the lack of space, which can be used by residents of all ages.

By combining selected places with needs that we heard about, we proposed in both places installations that function similarly.  The construction of fountain structures as well as small seats arranged on the amphitheater  allow the inhabitants to spend time in different ways: sitting, lying, sunbathing during sunny days, eating breakfast outdoors or finally meeting with friends. Simple forms allow users to use it in any way they like. They also temp people to spent some time outside with their neighbors.
We want our project to be proof that the space around us can be transformed using baby steps and small, low-cost interventions.

The project also had a symbolic meaning – it was a gift from Poland to Lithuania for the 2018 upcoming 100th anniversary of when both countries regained their sovereignty. It is a art of an international cultural programme called POLSKA 100 co-ordinated by the Adam Mickiewicz Institute that is accompanying the anniversary.

The project was initiated by the Adam Mickiewicz Institute, under the brand Culture.pl, as well as Vilnius City Hall, with support from the Polish Institute in Vilnius.

It was financed by the Ministry of Culture and National Heritage in the framework of the multi-annual programme NIEDPOLEGŁA for the years 2017-2021. 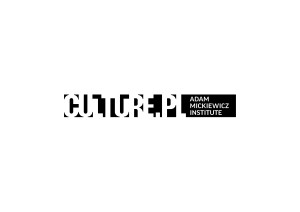